Analysis and description of San Pietro in Montorio 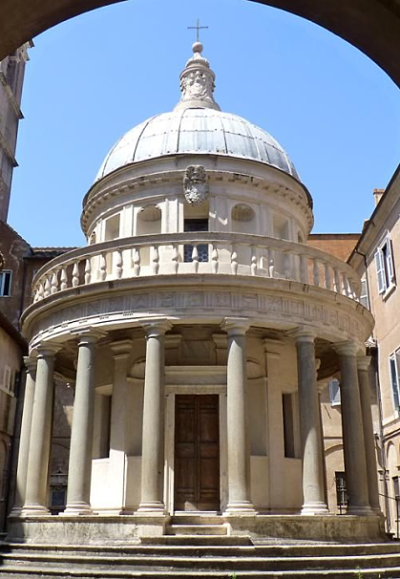 In this article you will find analysis and description of San Pietro in Montorio.
First we start by commenting briefly on the image.
This architecture by Donato Bramante that dates back to the Renaissance period (1503-1506 about) resumes in a clear and evident Roman and Greek architecture. Greek architecture and in particular the Greek time can be considered a pattern that many architects of later ages, even up to neoclassicism, you are inspired.
These architectures are showing a pursuit of perfection in construction and a clear harmony among the various elements that we will then analyze.
Suffering from the base of architectural work in question are a natural characteristic of Greek temples, the stylobate (Base tiers). Then there is the carrier of the opera, the columns, which in this case have no grooves. At both ends of the columns are the capitals, that, given their characteristic shape, are addressable to the Doric order. Above the capitals are the entablature, It consists of the architrave and frieze, composed in turn by metopes and triglyphs (presenting Christian religious symbols). This temple has a circular shape (similar to the Pantheon). The circle was the representation of perfection, all the harmony is enclosed in this form. Over the balustrade are frequently arches that look like framed within the structure, the apses. Above we find the dome.
Generally in Greek temples was present on porch, that in this building we can identify with the area between the columns and the main entrance of the temple. Not far from the main entrance are two columns bulwarks, are not free and apparently seem to belong to the Ionic order having regard to the form of the capital. Next to the columns there are Windows. Considering that the work in question is a small temple, remember the main function of the temple, that is the religious one. The temples were places of worship where the priests performed ceremonies and were worshipped the gods.
The Greek temples were generally colored blue, Red and white. the colors were of natural origin and with the temple deteriorated, disappearing and creating the common belief that the temples were white (marble color).
The Renaissance was a period of artistic and cultural renewal that characterized Europe and particularly the 15th and 16th century Italy. During this period there was a general rediscovery of ancient works (Greek and Roman).
This rediscovery of classical antiquity allowed him to reconstruct and replay architecture with particular features of Greek and Roman architecture.
The tempietto di San Pietro in Montorio is a clear example of this rediscovery.

4 Risposte a “Analysis and description of San Pietro in Montorio”