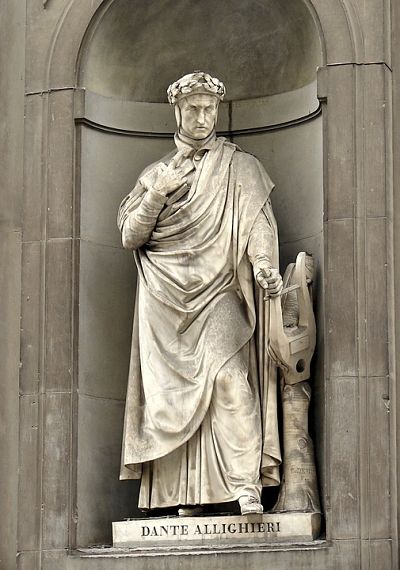 Dante Alighieri was born in Florence in 1265 (among the 21 may and 21 June, the exact date is not defined). Son of Alighiero di Bellincione, belonged to a Guelph family of minor nobility, with modest socio-economic conditions and no particular active role in Florentine politics.

In 1274 Dante Alighieri first met Beatrice, the woman who inspired much of the poet's literary production.

In 1285 Dante married Gemma Donati (with an arranged marriage) and had three sons, Iacopo,Peter and Antonia. In 1287 He stayed in Bologna and in 1289 He participated in the battle of Campaldino, where the Guelphs of Florence triumphed over the Ghibellines of Arezzo.

Here are the dates of the compositions of other works:

In 1300 Dante was appointed prior of the comune di Firenze, in ’ following year proposed to the Florentine municipality to prohibit the ’ military aid offered from Boniface VIII to resolve tensions between blacks and whites in Tuscany, for he feared that it was a move linked to the policy of expanding the Pontiff.

Bonifacio had indeed asked the support of Charles of Valois (brother of the King of France Philip IV) to pacify formally the two fronts, but really to ally himself with blacks and oust whites.

In 1302 He was sentenced in absentia to a fine, in two years of exile and all ’ rules barring public assignments. the 10 March the sentence is commuted to death penalty at stake; Summ ’ exile, Dante did not see his city.

In 1320 He moved to Ravenna in the Court of Guido Novello da Polenta. A year later between the 13 and of the 14 September dies in Ravenna for malaria.