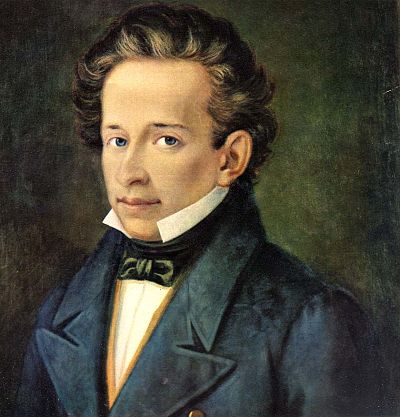 In this article you will find the Biography of Giacomo Leopardi

Giacomo Leopardi was born on 29 June 1798 in Recanati by count Monaldo Leopardi and Adelaide Antici. Eldest of ten brothers (five of them died shortly after birth) He was assigned to private teachers with low value, until 1812 When the father noticed who had nothing to teach them. Her training was then largely self taught (He learned Greek and Jewish language alone), made possible by the wealthy paternal library containing about 16’000 volumes, especially in theological, historian and scholar (Although there was no lack of works of French Enlightenment). The library soon became the favorite place by young Leopards, in the absence of real bonds with mother, but with a solid relationship and veneration towards father. Giacomo Leopardi began to write in 1809 producing evidence of poetry of all kinds, such tragedies but mostly historical and scholarly works such as the “Essay on ancient folk errors” posted in 1815, translations from Greek and Latin authors or philological investigations. In the library, studied a huge amount of volume, written teleological and works of various kinds during “seven years of crazy and desperate“, coinciding with the youth development, they had strong consequences on health of leopards, causing scoliosis, and visual impairment. For the young Leopards, only seventeen years old he started a continued relationship with pain and with the conscience of the limit, He directed his poetry and his thought.
Around the 1816 He began what he called “transition from learning to beauty” or your own “literary conversion“, process lasted until 1819 that led him to abandon progressively philological studies scholars and favoring a gradual increase of interest in poetry as a unique expressive instrument suitable for shaping individual passions and feelings.
The discovery of the poem coincided with the opening to the world, Thanks to correspondence with his friend Pietro Giordani, first fan of Leopards, I went to see him in September 1818 and helped him to become aware of its value. The second opening of Giacomo Leopardi can be found in love, the first, tried to Gertrude Cassi, his father's cousin, guest in the House from the Leopards’ 11 at 14 December 1817. Such love is at the origin of’ “The Elegy” , published in “Canti” with the title “First love”. We keep the biography of Giacomo Leopardi with some details about his works.
In 1817 Leopards began to keep a diary, which later will call “Zibaldone di pensieri” in which he collected impressions, ideas, memories, reflections in various forms. In 1819, the age of 21 years (that corresponded to the greater age of the era) Giacomo Leopardi tried to run away from home: asked the Passport, he prepared a letter to his father and his brother Charles, but the attempt was discovered.
In 1819 In addition to frustration over failure to escape was also a serious mental and physical exhaustion that led to partial loss of vision for more than six months.
In 1822 He finally managed to get permission to leave and went to Rome, where he remained until may 1823, Guest Uncle Carlo Antici. The stay in Rome was however a big disappointment: the greatness of Rome's monumental annoyed him, Roman culture appeared to him backward and poor.
In 1824 He began writing “Operette morali“, While in Bologna he published “Songs”. Among the 1825 and the 1828 He lived in Milan, Bologna and Florence, Finally he found a climate conducive to his health in Pisa, where resumed writing poetry. In 1827 released the first version of “Operette morali” and in 1831 the first edition of “Canti”. In 1833 He moved to Naples at the recommendation of doctors, they believed he had a climate better suited to his increasingly precarious health. Nel1835 went out, the second edition of the Publisher Neapolitan Starita “Canti” and in his last residence on the slopes of Vesuvius wrote “La ginestra” and “The moonset”. Finally the biography of Giacomo Leopardi, remember that he died on 14 June 1837 assisted by his friend Ranieri.