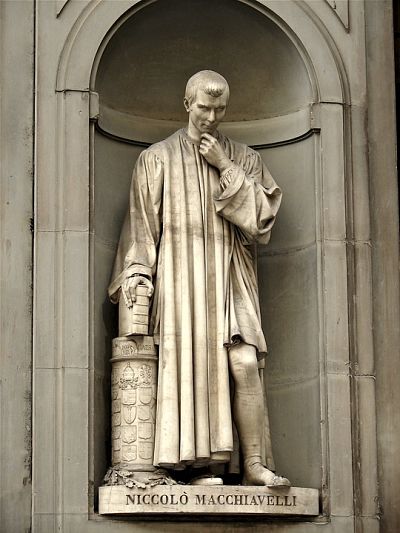 Niccolò Machiavelli was born in Florence on 3 may 1469. His father, Bernardo Machiavelli was doctor of laws, However because of its deployment, contrary to that of the Medici family, He could not take part in any public office, Thus remaining in poverty.

Starting from 1476 Niccolò Machiavelli started to follow language courses and Latin grammar to prepare for administrative and judicial career.

Due to the difficult economic situation could not access the ’ University, remain excluded from fine Florentine political culture circles.

Here are the main works that he composed:

1504 Ends the drawing up of the first Tenth anniversary

1509 Talk over things of Magna and above the ’ Emperor, Dell ’ ambition

1513 the beginning of the De principatibus, Discourses on Livy

1520 Life of Castruccio Castracani, Summary of the things of the city of Lucca, Florentine Islands

1525 ends the drawing up of Istorie fiorentine, Clizia

Among the 1499 and the 1500 He made several trips aiming at solving issues related to the military campaign that Florence was leading to the reconquest of Pisa, between July December 1500 He carried out his first mission in France.

Among the 1507 and the 1508 together with Francesco Vettori was on a mission in Germany, at the Habsburg Emperor Maximilian ’ d ’.

In 1512 the Medici family, restored power over Florence fired Machiavelli and condemns him to confinement for one year and to pay a security deposit of one thousand florins d ’ gold. A year later he was arrested and tortured with ’ accusation of plotting a conspiracy to kill Giuliano de’ Doctors, released from prison retires in his abode to Albergaccio. In 1514 he returned to Florence and began attending the Orti Oricellari.

In November 1526 He was sent to Modena with Francesco Guicciardini to study the necessary measures to stem l ’ invasion of landsknechts.

The 21 June 1527 dies and the day after is buried in the basilica of Santa Croce in Florence.