Are called scalar quantities those who are fully defined by a numeric value expressed thanks to its units of measure.

The vector quantities need , In addition to information about intensity of specifications concerning the orientation in space.

An example of a geometric vector is the vector quantity., that is, any size can be represented by a line segment oriented and defined by: 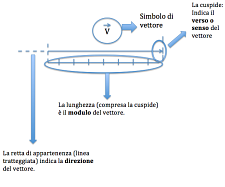 Two parallel vectors are said to agree if they have the same verse, If they have opposite direction are said opposites or divided.

Two vectors are said to equivalent If they are parallel, You equiversi and if they have the same length

It says apply vector a vector it is associated with a given start point, said point of application.