The iron curtain in Europe

From 17 July to 2 August 1945 the three allies of Yalta we met near Berlin (in Potsdam). Meanwhile was born a climate of mutual distrust between the u.s., Great Britain, France and the Soviet Union. Red Army had obtained large military and political successes than they had imagined and hoped the Western allies.

The Anglo-Americans believed that only the atomic bomb could stop a possible Soviet attack. Without a common enemy to fight for political interests the Soviet communists and Western democracies began to punch each other so risky.

In Potsdam decision was all USSR annexation of l three Baltic Republics (Estonia, Latvia and Lithuania) and the passage of all East German territories (over the rivers Oder and Neisse) to Poland (He was forced to cede to USSR its eastern provinces. The Soviet Union dominated in fact seven States: Czechoslovakia, a part of Poland, Hungary, the Romania, Yugoslavia, l ’ Albania and Bulgaria.

In March 1946 Winston Churchill said at a Conference in the USA on Europe was falling a “iron curtain”, a cover, military protection from behind which was strengthening l ’ the Soviet Union.

Below is a passage of Churchill's speech uttered in anAmerican University and a short piece on the iron curtain in Europe:

“The United States are now at the height of power. This supremacy, however, is a terrible responsibility for the future. Now you don't have to have just the feeling of having accomplished a duty, but also the concern to show you all ’ height of achievement. Our two countries are faced with a clear and unavoidable task. Reject it, ignore it or avoid it we will exhibit at big reproaches in the future. And’ English speaking peoples must focus their conduct of peace with the same perseverance, tenacity and clarity that they have sustained during the war. We must show us-and I believe that we will- all ’ up to this task (…). From Szczecin,the Baltic Sea, in Trieste, on the Adriatic ’, an iron curtain has descended across the continent. Behind that line lie all the capitals of the ancient States of Central and Eastern Europe : Warsaw,Berlin,Prague,Budapest,Belgrade,Bucharest and Sofia. All these famous cities and the populations around them lie in what I must define the Soviet sphere, and all are subject to an increasing control by Moscow”.

The political situation looked so: 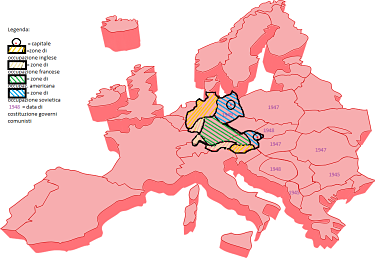 The countries of South-Eastern Europe ’, except Czechoslovakia, with a democratic political tradition and industrially advanced, were economically and socially underdeveloped. The Communist partisans with support of the Soviets established themselves as the ruling class by animating popular fronts.

The immense estates which had characterized and argued that part of Europe were expropriated without compensation and in its place sprang up farming companies controlled. Also in the industry there was a State appropriation, existing installations were nationalized. Right and centre-right parties tried to prevent political and social changes. The most significant event is the so-called “shot in Prague”.

In 1948 moderate democratic parties attempted to bring about the downfall of pro-Soviet Government. The reaction of the Communists was to convene great strikes , demonstrations and forming armed groups; their opponents were knocked out of the coalition Government. In Soviet bloc countries recovering production levels in the factory was very quick. L ’ Communist economy proved suitable for large investments and to re-industrialization, however the people's living standards improved significantly.