The period before the outbreak of the great war (the first world war) He saw Germany, just unified, conclude a defensive alliance Pact with Austria and Russia.

The three empires were ruled by authoritarian political systems monarchists and Socialists movements faced. Their industrial development rather tardy had lead to having to deal with powers such as England and France. The Russia and Austria were vying for the Balkans, where the Ottoman Turkish Empire was now in total decline and several Nations sought an independence.

The Russia in this context came up most at France and England, colonial powers that could control the world market, neglecting Austria and Germany instead (more advanced in heavy industry of any State).

The 28 June 1914 in Sarajevo ( in Bosnia), the Balkan region which had been annexed in 1908 the austro-Hungarian Empire, a young Bosnian Serb student, Gavrilo Princip was able to approach the carriage that was l ’ Archduke Franz Ferdinand 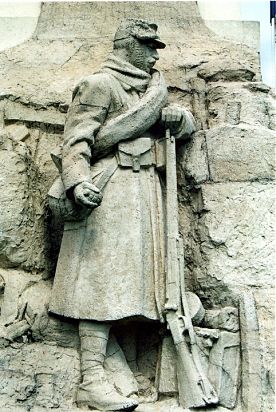 and that killed him (together with his wife) shooting them.

The Archduke had revolutionary ideas, in fact he wanted to reunite the dual monarchy into a single federal State. The young killer was part of a secret society called the “Black hand” , connected to a political party backed by Serb military hierarchies and Serbian secret service. The Belgrade Government was then accused of being guilty of involvement.

The Austria started an investigation immediately on international relations that had made possible the attack and 23 July sent an ultimatum to Serbia, who accepted in full except for the Austrian police to participate in the investigation of the murder.

As a result of numerous battles and skirmishes resulted in 1917 the spread of the spirit of rebellion and desire for peace among civilians. The economic and social structure imposed by the great war was such that their unmanned the production apparatus to provide more men on the front lines to fight, resulting in a total loss of lives of tens of millions of people.

The 28 July Vienna declared war on Serbia, starting the bombardment of Belgrade. On August 1, the Germany declared war on Russia and and the 3 August to France, on the same day Italy declared itself neutral. In the following months would be entered the war against Germany and Japan also Turkey against the Russian Empire. In 1915 Italy and the United States also entered the war alongside Britain and France. In 1918 at Brest-Litovsk the Germans and the Bolsheviks signed a peace treaty and Russia left the war. The 4 November 1919 the Austria signed an armistice with Italy, the November 11 signed it even Germany and in January opened peace conferences in Paris and ended the first world war.

The great war was a huge sacrifice of lives and resources to solve national conflicts generated by imperialism.