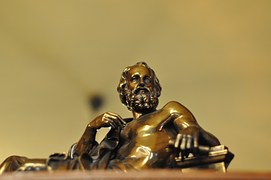 Plato was born in Athens and at the age of twenty he became a disciple of Socrates.

The master's death, (caused by a wrongful conviction for corruption to youth) represented for him a decisive event which led him to a general disapproval of contemporary politics, the philosophy he seemed then as the only way to lead the single male and the community towards justice.

The first period of Plato's philosophical activities dedicated to interpretation and defense of Socrates ' philosophical personality, his master (He was the first philosopher to whom we have all written works).

According to Plato's philosophy a relentless pursuit and an infinite effort towards a truth that no man has ever wholly, and that you must conquer step by step.

In addition to Plato's Dialogic form uses the myths, that is fantastic tales through which philosophical concepts and doctrines are expounded.

The myth can be seen as a tool through which the philosopher is able to communicate in a more spontaneous their teachings, as a means to be able to speak of reality that go beyond the limits within which the study rationale must be contained. Two works of Plato, the apology and the Crito clarify the attitude of Socrates in front of the prosecution, the trial and conviction, and his refusal to evade death by flight.

The apology consists elation of life devoted to philosophical research, the serene acceptance of Socrates Crito shows us instead of destiny that is condemned (or death by poisoning).

In two dialogues we also find the fundamentals of Socratic teaching:

1) virtue is one and you identify with science

2) in virtue as science is man's happiness

3) just as science virtue is teachable

The Hippias and the Lysis show us how beautiful, the useful, the convenient etc don't exist such as independent values and different. In other dialogues from the same time reaffirming instead the need to recognize their ignorance as a first step to undertake research that must lead to science. The ion tends to demonstrate how the poets know nothing of the things about this while, the hippias minor shows that there is a’ identity between virtue and science, because if not, the man who does evil voluntarily would be higher than the man who does evil involuntarily

-> the result is that evil is always ignorance.

In Protagoras is actually post and demonstrated the unity of virtue and his Reducibility to know, also disproves the teaching sophisticated every educational and training value. The Euthydemus clearly shows how the duty, the task of philosophy is the use of knowledge for the benefit of man.

Finally in Plato's Gorgias attacks the art and the very basis of teaching sophisticated, the rhetoric.

The rhetoric implies the belief that justice is just a human Convention. The well will then exercise of virtue or seeking a rational measure with which to curb instincts, the pulses.

The Cratylus focuses more on language, or better, If it truly represents a means to teach the nature of things. According to Plato the language only serves to bring the man to the knowledge of things.

The concept of truth for Plato