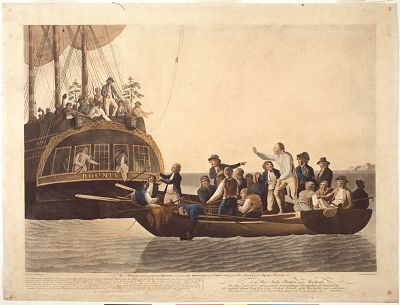 Here you can find a summary and analysis of the mutiny on the Bounty, written by Jules Verne published in 1879.
To begin this summary and analysis of the mutiny on the Bounty is worth exposing some important points about the book and the dynamics of the text.
If we begin with the title is interesting to recall the name of the ship (who is at the center of the story) has a real original, because in fact comes from the Bounty in New Zealand Islands, It already gives us indications on the geographical area in which develops the history of this new.
To respect the time it must be said that the story was published in 1879 While the news is happening in 1787 (details and dates were taken from the maritime history of Britain).
This new part of the collection of “Extraordinary travel” published by the Publisher Hetzel.
Before proposing the analysis of an extract and expose the fundamental features of the new one must also say that the first version of the story was written by a friend of Jules Verne, Mr Gabriel Marcel, which he had acquired the rights to the book for 300 CHF.
The book is built in a very logical manner. We present the general situation with the description of the journey of the ship and then the revolt guided by Christian Fletcher.
In the three chapters “abandonment”, “the abandoned” and “the revolts” We focus on two different fates: This revolts and the abandoned, so ideologically it continuous to stay on the chalupe of Bligh, the captain accused of being unfair in all Chapter 2 and the third back on the Bounty.
Here is an excerpt from the book

“Finally, the 12 on the morning of June, the coast of Timor appeared, After three thousand six hundred and eighteen miles of a crossing completed in appalling conditions.
The welcome that the English were given to Coupang was the most friendly. They stayed there two months to start. Then, Bligh, having bought a small schooner, won Batavia, where he embarked for England.
It was the 14 March 1790 that the abandoned land at Portsmouth. The story of the torture they had endured aroused universal sympathy and indignation of all people with heart.“

History happens fast enough, the author gives us only the basic information of history as the need, for example, the characters or the descriptions of landscapes. The text is set at exact dates (as in the maritime annals) making the narrative more truthful. From the beginning to the end there is a transposition in the future (we jump travel passes to speed up the narration) and so we can say that is a historic new.
The genre is generally the adventure story, or better the historical new adventures. The language is relatively simple, There are descriptions and similarity of words between chapters (ex. the schooner, People invent a fable to be ridiculous in front of the natives).The focus is external.
Verne has also used characteristics of the personality of Edgar Allan Poe in the news as for example the “delirium tremens” who had hit him.

To conclude this summary and analysis of the mutiny on the Bounty we have to do a formal relationship with the time.
The story develops in the 18th century, When there are two large power: The Netherlands and England, who fought in three war for supremacy, win by England had imposed his dominance of world trade (the Bounty was a commercial ship). In that time there was also the favorite voyages of exploration on the progress of navigation.
Jules Verne also cites James Cook, great browser which reached Tahiti but also include Bouganville, who did the circumnavigation of the globe.