Structure and themes of the Decameron

Summary, themes of the days, structure and deepening of the Decameron 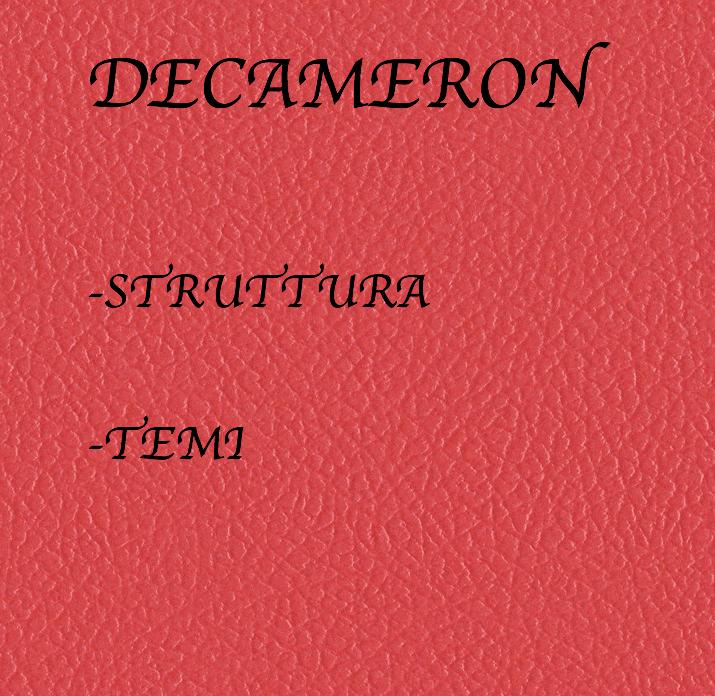 In this article you will find the structure and themes of the Decameron, with an overall view of the work, of its meaning and historical importance.
The Decameron was composed between 1349 and the 1351 and represents for the landing of a fundamental process of maturation Boccaccio author, replacing the romance and above airy and sentimental to disenchanted observation of reality (helping to broaden the estimate of Boccaccio at the fellow).
We begin this analysis of the structure and themes of the Decameron emphasizing the most important aspects that arise to the first reading of the Decameron, that is the extraordinary variety of situation, environments and characters.
The term “Decameron” derived from the Greek Deca (ten) and pitikutzza (days).
The Decameron composed one hundred novelle, the author imagines have been featured on ten a day for ten different days by three men (PHILOSTRATUS, Panfilo and Dioneo) and seven women (Fiammetta, Filomena, Neifile, Elissa, Lauretta, Emilia and Pampinea). Boccaccio imagines, that during the period of the plague in Florence (1348) meet casually, the Church of Santa Maria Novella ten young. The ten young people to escape the pestilence decided to retire to a private villa on a hill outside Florence, accompanied by their servants, to spend their days singing, dancing, stories and conversations. We continue this vision of the structure and themes of the Decameron saying foreach of the ten days he was elected to round their King (or Queen) of the day, who assigns the theme to which we must abide to tell the stories. Every game day c’ place for a story with clear case and within two days of the week the narrative adjourned to regard religious traditions (on Friday, day of the passion of Christ and Saturdays). also important to remember that two days (the first and ninth) are not bound to a theme and a young, Dioneo, can choose any topic for the stories told during the day.
The stay of ten young lasts for two weeks, from Wednesday to next week, on balance the narrations lasting ten days. Between the novel and the other we find comments from listeners, also at the end of the day we find a ballad, Sung in turns by young people.
The opera opens with a Preface specific page, in which Boccaccio exposes features narrative of the work, dedicated to women, as leisure and relieving their loving penis. Afterwards we find l’introduction, that describes precisely the situation of Florence in the time of plague, the meeting of young people in the Church and their decision with the move to the villa.
We continue this structure and themes of Decameron mink with the the relationship between narrative and theme day:
First day (Pampinea): free theme
Second day (Filomena): “who from several things annoyed, beyond his hope managed a happy ending”
Third day (Neifile): “about anything desired by him with ingenuity and resourcefulness acquired or lost recovered”
Fourth day (PHILOSTRATUS): events of “those that love them had unhappy end”
Fifth day (Fiammetta): “there that to some lover, After some proud or hapless damn, happily took place”
Sixth day (Elissa): ” those with some lovely bikes, attempted, She roused herself, or with prompt response or trick escapes loss or hazard or hoax”
Seventh day (Dioneo): “mock, which out of love or rescue them, women have already made their husbands, without being noticed or not
Eighth day (Lauretta): “those who mocked all day or female to male or male to female or to each other are”
Ninth day (Emilia): “We think each second that he likes and what most pleases”
Tenth day (Panfilo): “who freely or magnificently aught to work around’ facts of love or else”.
To finish this analysis for structure and themes of Decameron We must obviously deal with the latter. The topics covered by novels and then from the Decameron itself are mostly l’love (already the subject of a vast literary output in earlier times, presented in the Decameron below various forms, ranging from simple physical desire to courtly love as a feeling, tied to the values of chivalry), the’intelligence (conceived as a set of quality , the ability of man to understand a given situation and choose the behavior pivantaggioso; the readiness of intuition or the sagacity in acting. As for the love we find a wide case studies ranging from cunning in order to have a beloved Golden personal gain to the refined intellectual superiority that translates into ironic) and finally there is the Fortune (some kind of external force, beyond the power of man, a series of unforeseen circumstances that the narrative plan are presented as the random gaming .
important to remember that for Boccaccio luck a concept totally secular result of natural forces and historical events and not a supernatural figure).

Una risposta a “Structure and themes of the Decameron”