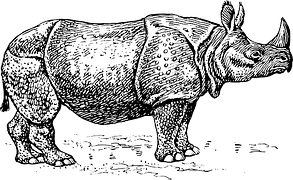 In this presentation of Rhinoceros by Eugène Ionesco, You can find basic information about the book.

He was dramatist and writer and he spent most of his life traveling between the France and the Romania. He was representative of the theatre of the absurd, He therefore outlined a dramaturgy in which nonsense has a satirical scope. In addition he wrote numerous works including the best-known sound “The Bald Soprano” and “Chairs”.

Type and structure of the work:

This book is a play divided into four tables for three acts (the second is divided into two tables). It should be noted that the plays are built around dialogues between the characters and this work belongs to the genre of the theatre of the absurd.

Act 1: The book begins with the two main characters, Jean and Berenger, found on the terrace of a bar and they discuss. All of a sudden a rhino runs through the main square of the city and leave lands all people. After going on a second Rhino but it kills her cat. Jean and Berenger begin a discuss and get angry.

Act 2: The two act begins in the office in which the works of Mr Bérenger. He discusses with his colleagues what happened the day before and they take different positions. Appare Madam beef, leuqel husband is absent from work since some day , but tout to kick a rhinoceros hits and destroyed the stairs to the office and Madam Boeuf, by recognizing her husband in the rhinoceros pursues him. At the end of the second act found sick Jean in her bed, It also transforms into a rhino.

In the third act Bérenger is in his room and later arrive Dudard and Daisy, they discuss on the situation and if joining the rhinoceros or not. Dudard decides to follow the rhinos. But after having declared his love Daisy and avoi planned their life Daisy also decided to join the rhinoceros. Bérenger he decides to remain the only and the last man on Earth.

Many people on interpreter this book as a metaphor for totalitarian regimes rising on the eve of the second world war, in other words is a satire on the behavior of the man who is compared to the rise of a new ideology.

2 Risposte a “Presentation of Rhinoceros by Eugène Ionesco”